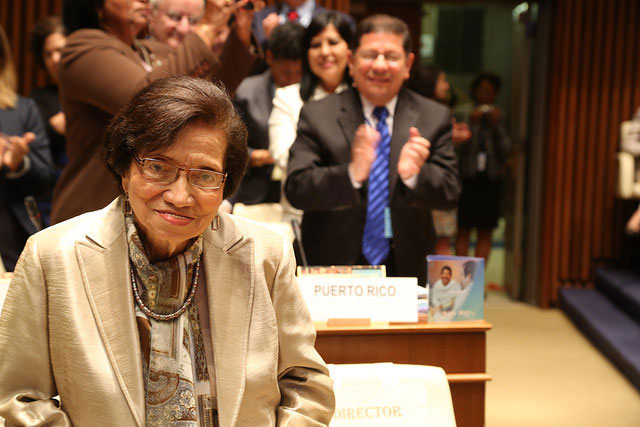 Rodriguez, of 93 years and a life devoted to education, health and science, received the award from the Director of PAHO/WHO, Carissa F. Etienne, during the 54th Directing Council of PAHO, which develops until 2 October in Washington DC.

"We believe that no one better represents the aspiration of achieving 'Health for All' in the Americas Dr. Rodriguez," said Etienne. "You have firmly defended that principle in his country, the Pan American Health Organization and as an ambassador for public health throughout their lives," she said.

Dr. Rodriguez was honored for his tireless struggle for the right to health, equity, women's rights and justice. Until just over a year was health minister El Salvador, becoming the first woman to hold that office in her country. She is currently a presidential adviser on health and education, where a set of functions plays towards achieving universal health coverage and quality education, with inclusion and equity in El Salvador.

Considered a pioneer in the field of research and teaching in cardiovascular physiology, Rodriguez has been throughout her life a promoter of major reforms in medical education. Currently she leads the sectoral transformation of their country into an integrated universal, fair and high-quality health, with the right approach and strategy based on primary health care system.

Rodriguez was part of PAHO for more than 20 years (1972-1994). She worked in Mexico, Venezuela and came to occupy representation in Dominican Republic. She contributed to the development of educational and research and actively cooperated in creating pioneering programs in health and social sciences as well as an extensive analysis on the training of health personnel and the development of new educational approaches appropriate to call Alma Ata on Primary Health Care.

"Life rewarded me with this valuable addition to the body, which allowed me to live realities that had known distance, turning direct collaborator in the construction of health of the Americas," Rodriguez said after thanking the distinction.

Throughout her life, the Salvadoran doctor received numerous awards from institutions, organizations and governments. She was named Doctor Honoris Cause at least 12 universities in the region of the Americas, along with academic recognition of diverse order for his contributions to medicine and public health and the fight for the rights of women.

The distinction as the Public Health Heroine of the Americas is the highest recognition of PAHO/WHO, was established during the centennial celebration of the organization in 2002.

In the past 13 years, the Pan American Health Organization has recognized individuals who have made outstanding contributions to improving the health and welfare of the peoples of the Americas. In 2014, the Brazilian epidemiologist Ciro de Quadros, one of the central figures in the eradication of polio in Latin America and the Caribbean, was appointed Public Health Hero of the Americas. Before her were also honored with this distinction David Tejada de Rivero of Peru; Jacinto Convit, of Venezuela; and Donald Henderson of the United States, among others.