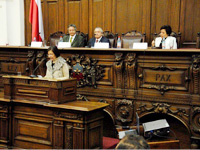 On Wednesday, July 18, in the meeting room of the Chamber of Deputies (former National Congress) was officially launched this network that has the House of Bello, through the School of Public Health, one of the institutions that comprise it.
The Network of Public Health Training Institutions is a collaborative effort of all Chilean universities that have academic units of Public Health. Its mission is to articulate the university entities forming Public Health for the development of the discipline in the areas of teaching and research excellence and social connectedness, creating synergies that enhance the contribution of the whole network to public policy health in Chile.
The launch of the Network of Public Health Training Institutions attended by officials and scholars from the various houses of study, and was chaired by the Minister of Health, Dr. Jaime Mañalich, the Dean of the Faculty of Medicine University of Chile and president of ASOFAMECH, Dr. Cecilia Sepulveda, the director of the School of Public Health in the same campus, Dr. Oscar Arteaga, and Conicyt representative, Ms Sonia Lillo.
The dean Cecilia Sepúlveda said that today was a very important milestone for the country's public health. "The association of these universities collaborate cross intended to generate new research and policy proposals in this area, in addition to establishing a definition about what should be the core competencies in public health should know and learn students different careers in the sector ".
"Health should be constructed with a cross look to be expressed in the curricula. Here public health has a key role, as it depends on other areas.'s Health is determined not only by the biological, but also by the interaction between biological and psychosocial, in order to analyze the human being in their environment, "concluded the president of ASOFAMECH.
For his part, Dr. Oscar Arteaga said "we want to be a leader of the entities forming university in public health, which influences the definition and development of university education policy and research excellence in public health."
This group consists of 19 universities, both public and private, that meet the prerequisite of having a school or public health department: University of Chile, Catholic University, Catholic University of the North, University Development, University of Frontera, Valparaiso University, Universidad Andrés Bello, Universidad Mayor, Universidad de Concepción, University of Santiago, University of Biobío, Southern University, University of Tarapaca, Antofagasta University, Universidad Diego Portales, Universidad San Sebastián, Universidad de Talca, University of Los Andes University.